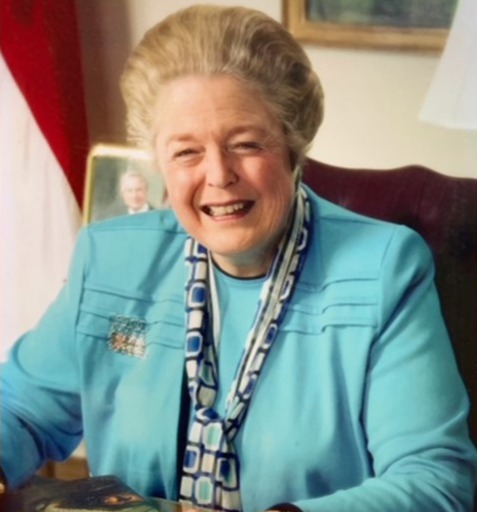 The remarkable Betty Ray McCain died peacefully in her home surrounded by family on November 23rd.

Betty Landon Ray was born to H.T. and Mary Howell Perrett Ray on Feb. 23, 1931, in Faison, NC. The daughter of a country lawyer and a dedicated schoolteacher, Betty and her brother, Horace, were imbued with the values of compassion, dedication, service, and humor in the face of the adversity of the Great Depression and World War II.  Upon her graduation, a year early as high school valedictorian “of a class 11” as Betty would always add, she matriculated to St. Mary’s College, and went on to receive her undergraduate degree from UNC-Chapel Hill, followed by a master’s degree in Music from Columbia University Teachers College.

A serendipitous job opportunity at the UNC Campus Y provided for a return to her beloved Chapel Hill, where Betty found joy in seven decades of service to the university system. She was honored to serve as a member of the UNC Board of Visitors, and eventually Chair the UNC General Alumni Association, Center for Public Television, and the Lineberger Comprehensive Cancer Center Board of Visitors. Her time and talents were recognized by an honorary degree from UNC, the GAA distinguished service medal, and the William Richardson Davie Award.

It was in Chapel Hill that Betty met medical resident and fellow Tar Heel, Dr. John Lewis McCain. Soon after their courtship and marriage, she and John were called to Wilson, NC, where John pursued his career in internal medicine and rheumatology. The births of their two children, Paul and Eloise, soon followed.  Both John and Betty became active in the life of their community. Through the years, Betty supported many local causes, including serving as President of the Wilson Downtown Development Corporation, Vice-Chair of the Wilson County Historical Associates, Co-Chair of the Wilson Whirligig Festival Entertainment Committee, member of the Wil-Med Health Care Foundation Board of Trustees, and member of the Wilson Rose Garden Society, and collaborator in the McCain Internet Empowerment Project - an intergenerational learning and access program for the elderly initiated by her late husband. She was also a dedicated choir member at First Presbyterian Church where she was a deacon and an elder.

Engagement in public and civic life was instilled in Betty from a time beginning in her youth with her father’s own active participation in local political affairs “downeast”.  In her early years in Wilson, Betty would volunteer in the Democratic gubernatorial campaigns of Terry Sanford and Richardson Preyer, where she met a young attorney, Jim Hunt, whose own statewide campaigns she would later lead and rally over the ensuing decades. Like Gov. Hunt, Betty was inspired by the tangible improvements that politics and representative government could make in people’s lives.  With her positive and energetic approach, she championed the ideal that everyone should have a voice and a seat at the table.  In addition to lending her energies and talents to countless campaigns for more than half a century, Betty would serve with distinction as President of N.C. Democratic Women, Chair of the N.C. Democratic Party, and in the leadership of the Democratic National Committee, where she attended multiple DNC Conventions as a delegate. Framed quotations adorning her kitchen included proclamations such as “Well-behaved women seldom make history,” and “People who say they are above politics are really saying that democracy is beneath them,” which also became guiding touchstones for her grandchildren.

The light of Betty’s good cheer and tireless motivational energy were recognized by many other organizations and soon led her to serve in multiple organizations including the NC Medical Alliance, the North Carolina Museums Council, along with service on the Tryon Palace Commission, the First Flight Centennial Commission, Chair of the United Way State Employees Combined Campaign, the North Carolina Mental Health Association, the First Colony Foundation, and as a regional corporate board member for SPRINT Telecommunications. Betty was delighted to also have numerous public service opportunities including positions on the state Advisory Budget Commission, the Governor’s Task Force on Child Advocacy, four terms on the UNC System Board of Governors, and culminated in 1993 with her appointment in the Hunt Administration cabinet to be NC Secretary of Cultural Resources.

Betty’s contributions and achievements on behalf of the people of North Carolina were recognized with numerous accolades and awards. In addition to the honorary degree from her own alma mater, similar distinctions were bestowed by Wake Forest University, UNC-Greensboro, UNC-Wilmington, and Barton College. Her love and service of higher education also earned her awards and recognition from UNCG, NCSU College of Design, St. Andrews Presbyterian College, and others.  She was lauded with conferral of the North Caroliniana Society Award, the ArtsNC President’s Award, the Joseph Caldwell Award from the North Carolina Humanities Council, induction into the NC Women’s Hall of Fame, and from the State of North Carolina, the Order of the Long Leaf Pine, and the North Carolina Award.

While all of her titles and distinctions were impressive, the one she held perhaps closest to her heart was the title of “MeMe” to her five grandchildren, great grandchildren, great nieces, and great nephews. She sought to encourage and support their individual interests in conversations, carefully selected books, and special trips.  She was confident and encouraging that they could do whatever they hoped to do in this world. MeMe never missed a graduation, performance, or event.  She firmly held the unbiased view that these children were “practically perfect in every way.”  This sentiment was mutual.

Amongst the gifts from grandchildren, one of her most cherished mementoes was presented to her following a prolonged and scrappy battle of hard-knuckled policy and elbowed politics, a gravestone rubbing which declared “She hath done what she could.” In all things she has undertaken, with a disarming wit which drew smiles and admiring nods from even her fiercest adversaries, Betty hath done what she could for her family, her friends, her faith community, and the state she loved.

The family wishes to express heartfelt gratitude to caregivers and health providers for their compassionate companionship and support in Betty’s final years.  Memorial contributions may be made to:  First Presbyterian Church of Wilson; UNC Lineberger Comprehensive Cancer Center; PBS North Carolina; the Museum of History Foundation; or the charity of one’s choice.

A memorial service will be he held at First Presbyterian Church in Wilson, NC on Saturday, December 3rd at 11:00 a.m. with a church reception to follow.

To order memorial trees or send flowers to the family in memory of Betty Ray McCain, please visit our flower store.