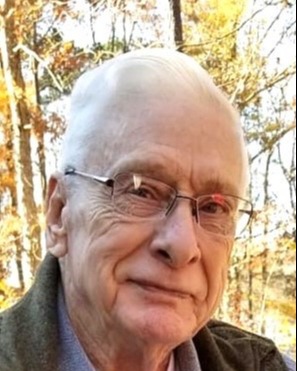 George M. Joyner, also known as Monk Joyner, of Wilson, passed away peacefully at 94 years of age on Thursday. He was married to Janice Joyner for 68 years before her death in 2017. In the early years of marriage, he served in the United States Army as a Corporal, stationed in Stuttgart, Germany and served in the Korean War. Always being the perfect gentleman, George was known best for his infectious personality, he was generous and caring to all he crossed paths with. George wore many hats throughout his life. He spent time farming, working in the service center at Paul Berry Chevrolet, Firestone Retail Store and White’s Tire Center as a skilled mechanic and eventually owning and operating Bear Alignment Center, Inc. of Wilson. One of his favorite pass times, that he was well known for was his love and skill of fishing. George spent many weekends fishing with friends, holding fish fry cookouts for them, family, and customers at Bear Alignment Center.

Since 2019, he resided with his daughter and son-in-law, Renee and Scott. He spent much of his time reminiscing about fishing trips with dear friends, his love of family and enjoyed the flight patterns of hummingbirds around the patio.

He was preceded in death by his wife, Janice Coley Joyner, and parents, William Emerod “Bud” and Mary Elizabeth “Eliza” Joyner and eleven siblings.

The family would like to extend gratitude to Paula Little Wilson, Barbara Sugg, Judy Carmack, Susan Lococo, and Linda Taylor for their care and compassion assisting Renee and Scott as caregivers. Also, a big thank you to the nurses and nurse aids of 3HC Home Hospice as well as Kitty Askins Hospice Care Center in Goldsboro. The excellent care he received and the guidance during this season of life is immeasurable, “Thank You”, just isn’t enough to express gratitude from the family.

A Celebration of Life will be held at 2 p.m. on Sunday, December 18, 2022, at Joyner’s Funeral Home. Pastor Chrystal McCullen will officiate. Interment will follow in Evergreen Memorial Park. The family will receive friends prior to the service from 12:30 – 1:45 p.m. at Joyner’s Funeral Home and at other times at the Moore residence, 3539 Speights Bridge Road, Stantonsburg.

To order memorial trees or send flowers to the family in memory of George "Monk" Munford Joyner, please visit our flower store.