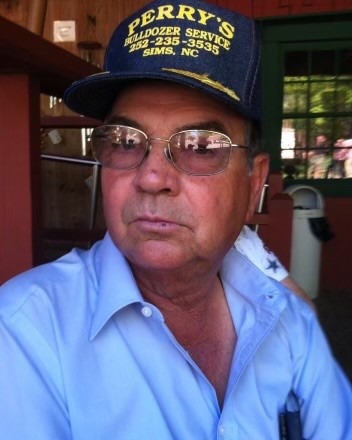 Glenwood Harris Perry, 76, of Sims, passed away peacefully at his home surrounded by family on Monday, December 12, 2022. A Graveside Service will be held at 11:00 a.m., on Wednesday, December 14, 2022, in the Bailey Town Cemetery. Rev. Walter Blackman will officiate.

Harris was a loving husband, father and friend that was cherished and will be missed by many. Over the years he enjoyed farming, dancing, playing cards and spending time with his grandchildren. Farming was his first love, but he was also the proud and successful owner of Perry’s Bulldozer Service for 38 years. During this time, he made many friends and developed strong ties throughout the area.

Harris was preceded in death by his parents, Modis and Sarah Perry; brothers, Eugene and Donald Perry and his brother-in-law, Bill Wells.

In lieu of flowers, please consider donations made in memory of Harris to the Michael J. Fox Foundation for Parkinson’s, P.O. Box 5014, Hagerstown, Maryland, 21741.

To order memorial trees or send flowers to the family in memory of Glenwood Harris Perry, please visit our flower store.