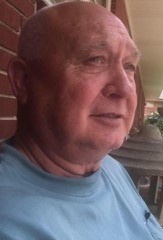 Jimmy Dolittle Wilson was born on July 15, 1943, to James and Mary Ellen Wilson. He was raised in Lucama on a farm working hard as a young man. He graduated from Lucama High School and decided he was done with farming. He went to work with Thurston Motor Lines until being drafted by the United States Army, he served two years in Germany as a mail carrier. After completion of his service in the Army, he returned to Thurston Motor Lines, but was recruited by Yellow Freight Truck Lines, where he was employed for over 40 years.

He was a dedicated family man, wonderful husband, devoted father and caring friend. Jimmy always said his sister Debra made him the man he was today. He not only looked up to her but helped take care of her. Jimmy was filled with kindness, goodness and never spoke ugly of anyone. He loved the Lord and lived a life of Christ. He enjoyed hunting, piddling in the garage, eating at Parkers BBQ and Bojangles. He loved going to his place at Saddle Ridge Campground in the mountains of North Carolina for the past 12 years. Wherever Jimmy went, his dogs, Marley and Abby were sure to follow.

He was preceded in death by his parents; James and Mary Ellen Wilson; sisters, Doris Collier and Debra Wilson; brothers, Raymond Wilson and Ray Wilson.

A Memorial Service will be held at 6:00 p.m. on Friday, July 8, 2022, at Joyner’s Funeral Home, 4100 Raleigh Road Parkway, Wilson. Rev. Larry G. Black will officiate. Visitation will be immediately following the service.

In lieu of flowers, donations may be made to the Pulmonary Fibrosis Foundation, 230 East Ohio Street, Suite 304, Chicago, Illinois 60611-3201, or the charity of one’s choice.

To order memorial trees or send flowers to the family in memory of Jimmy Dolittle Wilson, please visit our flower store.