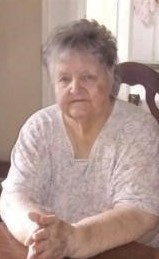 Patsy always had a special touch and a drive for helping people. She obtained her master’s degree in Nursing and Psychology Sciences from the Hospital Corps School where she served her country in the United States Navy with an honorable discharge after ten years. During this time, Patsy was also a rescue home and safe place for unwanted children and runaways, but always stayed busy with her four daughters who kept her on her toes with their activities and being the leader for the Girl Scouts. Her favorite pastimes included sewing, painting and playing dominoes. She often would sew costumes for the Hinnant’s School of Dance. Patsy enriched many lives over her lifetime and will be missed by all who were lucky enough to know and love her.

She was preceded in death by her parents, Leslie and Rachel McDonough.

To order memorial trees or send flowers to the family in memory of Patsy McDonough Adkins, please visit our flower store.